Behind the Scenes at the MFLS MUSIC VIDEO SHOOT 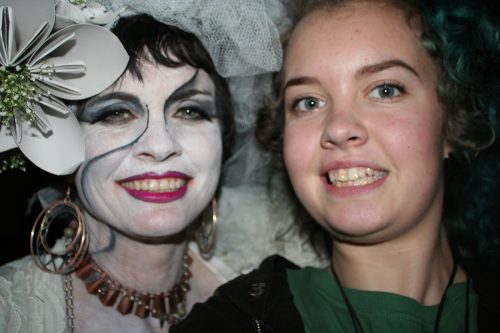 These are snaps of behind the scenes during the MFLS 12 hour video shoot. It took a production crew of 6 to make this happen with most people volunteering their time. Oliver de Lantsheere and I produced this music video.We brainstormed a week before the shoot and a couple of days before the shoot I collected 50 vases, 2 wedding dresses, copious amounts of white fabric/lace, tables and chairs while Oliver filmed, crushed, froze, burned flowers I had gifted him. The night before we set up most of the backdrop at the Super Natural Factory in West Oakland. On Friday Feb 6 we began to unload at 3 pm. The party started with mimosas and snacks. Jalua and Donna spent hours on my make up and hair while Max, Noah and Oliver finished the set dressing. Max stepped in to finish off my recycled wedding dress and head piece  and then at 8 pm I was ready to go on set. We began to discuss and improvise what I would do up there.  We began rehearsing while Oliver continued to projection map and experiment with new images. Around 1 am, after many rehearsals, we began filming live takes.  I was allowed to do everything except break the vases so I had to pretend that until the last take. At 330 am, hours later, excited, blistered and exhausted, we opened the last bottle of champagne, toasted to the fun and insanity that comes with being creative and then took the last take. This time I was allowed to break glass which was exhilarating except I kicked my shoe off half way through the take and the floor was covered in broken class so I had to hop on one foot for the dancing scene.  We ended up prefering the last take, no edits, and chose it for the music video.  Thanks to Oliver de Lantsheere, Jalua Dell, Max Neuman, Donna Wood and Noizy Ark for helping me make this happen!!!