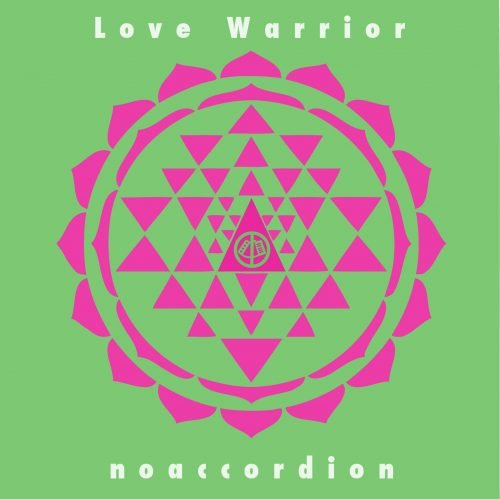 When multi-instrumentalist Onah Indigo first picked up the accordion, she had to put it down. It was heavy, awkward, annoying.

Yet eventually, she found an idiosyncratic stance that puts the instrument center stage, while defying its limitations. Like the push and pull of bellows, this tension generates a quirky blast of energy. Add club beats, underground MCs, freaky variations on deceptively familiar keys, a bit of surrealist wit, and a rebellious fight for greater openness, and you have noaccordion.

On Love Warrior (release date: Aug 18, 2016), noaccordion’s first full-length album in five years, Onah digs deep into the polyrhythms and quirky phases of the heart. She taps MCs (Sunru, Chatterbox, Delwin G), beatboxers (Mastah Lock), and musical mavericks (guitar wizard Eenor) to get the party started–and to celebrate the glories of womanhood, from the elevated to the sensual.

“The tracks on this album mark a major milestone in my movement toward greater confidence and joy, something I think a lot of women can relate to,” muses Onah, speaking of her journey through motherhood, divorce, renewed sexuality, and artistic transformation. “I feel I’ve grown musically stronger and set aside all my obsessions as an audio engineer. I’ve become a lot more open and playful. For me now, it’s about juxtaposition, yin and yang. It’s the light and the dark. We need to embrace both.”

Embracing wide ranging influences comes naturally to noaccordion. Onah got hooked on club music during the first big wave of techno, drum ‘n’ bass, and jungle that swept Europe in the early 90s. She later turned to beatmaking after the death of her second child, as a way to cope with the grief. It became a musical fascination, one she honed over the years, in response to changing sounds on the electronic music scene, sounds that come through loud and clear on the trap-inspired instrumental “Frey”.

Rhythmic experiences from other traditions and genres, from samba to jazz, have infiltrated her beats, expanding the 4/4 tendencies of many club tracks. “I want to feel the internal pulse in my body,” Onah explains. “When you’re in a samba band, you dance as you walk to the beat. You internalize the pulse and then lay your polyrhythms on top,” an approach that creates intriguing tracks.

Like the club music and hip hop that inspired the album, noaccordion’s music is made to get people moving, while delivering a message of liberation, self-love, and sheer delight. “I’ve got a huge connection with movement and sound,” she says. “I can’t sit still when I’m playing. I’m going to embody that pulse in some form of movement.”

Hence the accordion, which, despite the project’s name, pops up on several tracks (“Trouble” and “Mama Nature”): It allows a keyboard player to move. But the instrument has a charisma all its own, one that Onah does not want to overshadow her work.

“I call my project noaccordion for a reason. People have strong reactions to the instrument. Most people love it; it often reminds them of their cultural past. But some people can’t stand it. It’s a particular sound, designed to be played outdoors and loudly,” she says. “I may not play it a few years from now. It may not appear in my repertoire. I don’t want to be defined by it.” But of course, sometimes noaccordion includes accordion: “I like to break rules,” laughs Onah. “Even my own.”

Though Onah’s songs, performances, and engineering are the heart of noaccordion, she brings friends and kindred spirits into the mix, fellow musicians from the Oakland underground with distinct voices and visions. They include vocalists like Sunru, featured on Love Warrior’s opening track. “He’s phenomenal. I needed someone who could pull off a Rick James-style vocal. He was the only one I could think of. We had a blast. He has to be one of the most unique guys, and his freestyle ability is amazing, hip hop meets metal.” Or Chatterbox, a puppeteer, MC, and environmental activist who connected instantly with Onah, thanks to his love of accordion. (He shines on “Mama Nature.”)

There’s a musical thread tying the tracks together, a harmonic choice that reinforces Onah’s call for self-discovery, for finding extraordinary strength and new insights in the ordinary. “Conceptually, these ten songs were all written in C, but the modes are each different,” she explains. “It adds to the strange harmonies that might sound a little unusual to some listeners. I’ve always had this weird relationship to C; I thought it was boring. But there are endless possibilities in each key. I’m finding the freak in the key of C.”

Finding the freak in plain sight is part of accepting freakiness and growing in love. “I had a huge heart opening a few years ago,” Onah recounts. “I’ve learned to that to keep my heart open I must maintain a fierceness. A warrior’s love. Even if people are knocking me down, I fight to stay in that place of love, starting first and foremost with myself.” It’s a fight worth fighting, and one that resonates beautifully on the dancefloor.