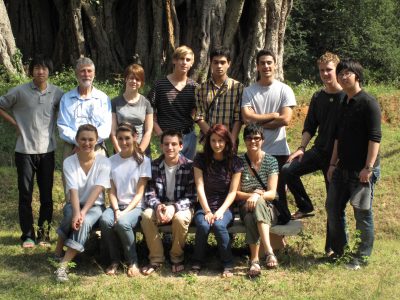 For a month during December 2009 to January 2010 I traveled to Southern India accompanying 12 highschool seniors from Krishnamurti’s Oak Grove School based in Ojai, California. I had been a highschool art teacher there for 8 years and was chosen to lead the annual sister school senior trip to India.

We visited 3 Krishnamurti boarding schools each for a week and then we finished up our trip at the Gurukula Botanical Sanctuary in the rainforests of the far southern state of Kerala.

At the sanctuary I was entranced by this paradise, enticed by the concept behind saving plant diversity and during my visit I took many pictures and recorded bird and insect sounds.

The name and place have always stuck with me and when I had finished the new LP this Spring I began to search for it’s name and the sanctuary came to mind so I decided to research what Gurukula meant.

I discovered that gurukula (teacher/family) was a type of residential schooling system in ancient India with shishya (students) living near or with the guru, in the same house and that this was the common form of education in India before British rule. For centuries India had been scattered with small intimate gurukuls. I thought the meaning of the word tied into my educational experiences at Oak Grove School and its sister schools in India so I decided to take it on as my newest LP title. I will give any profits made from the selling of this new music to the Gurukula Botanical Sanctuary.

This is the beginning passage of Gurukula Botanical Sanctuary’s Story:

For forty years we have been observing how habitats and species of this mountain biome can be nurtured to health from conditions of devastation. It is clear to us that forests and grasslands and other habitats of the Western Ghats can return.

Our story is a simple one. There are two strands to it: a why and a how.

Briefly, the Sanctuary is a small community that nurtures rainforest beings.

This requires first of all: a living rainforest (living habitat). There can be no rainforest beings – plants, animals and fungi – without an actual rainforest, be it large or small. Furthermore, there can be no sweet water, rain or cloud, without primary rainforest (primary habitat).

Second, because rainforests have been so horrifically and massively destroyed, it is those very same rainforest beings that can help to heal decimated areas around standing forest, so that the whole forest can grow outwards again.

Forests need their beings. Beings need their forests. Our work, as ecosystem gardeners, forest restorers, plant protectors and educators, draws its inspiration from this conversation between living beings and their environments, and the fact that they are inseparable. Moreover, gardening, anywhere in the world where it is practiced as a conversation, works with the seemingly dual nature of life: its fragility and its resilience.

Third, there can be no human life without the forests of the planet. There can be no atmosphere or biosphere or hydrocycle or steady state climate without the great forests of this earth. Despite this incontrovertible fact, more forests have been destroyed than ever before, since the dawn of the new millennium. Soon there will be no forests if human beings continue with their destructive ways.

We are gardeners who have worked for forty years in the Western Ghat mountains, protecting primary forest on a small piece of land, and restoring bit by bit, adjacent areas that had been completely devastated, to forest cover. Where there used to be one or two species of exotic crop plants, or barren hillside, there are now several hundred plant species growing in abundance. In fact there are over two thousand species growing here, an example of how a small part of the biosphere can be nurtured with a magnificent diversity of native plants……..