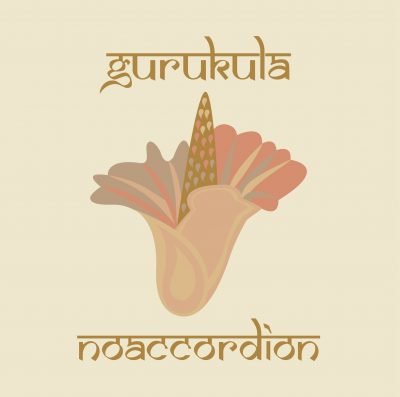 It took years for noaccordion’s Onah Indigo to realize that the crickets chirped at just the right BPM for a great trap track.

The Oakland-based electronic musician and accordion maverick had made a slew of recordings during an extended trip around South India. Her journey took her to several schools and to Gurukula, the nature preserve that gave her latest album its name. Balancing trap’s gritty edge with serene vocals and dubbed-out accordion licks, Gurukula ripples with energy, yet radiates calm, as the sound of bhajans and songs in Kannada entwine with the atmosphere of an untouched paradise, with its organic beat.

“I love juxtaposition,” explains Onah, “whether it’s the accordion and club music, or children’s voices and 808 bass. When you put these samples into a trap framework, it changes both and says something new, something that’s both raw and contemplative.”

Onah has spent a creative lifetime working in juxtaposition. She wrangled with the awkward but fascinating potential of the accordion, leading to her project’s quirky name. She’s made electronic beats in service and praise of nature, and explored bass music as a way of coping with complex, tragic circumstances in her life as a mother.

Gurukula flows from that same impulse, but with the trip shaping the overall vibe of the tracks. Onah taught at Oak Grove, the school in Ojai founded by philosopher and spiritual teacher Krishnamurti. The school’s student-centered approach was decades ahead of its time, and art, Onah’s subject, was a central part of the curriculum. So was an annual trip for seniors to India, to visit sister schools, also founded by Krishnamurti. “We stayed in 3 different schools, all boarding schools,” recalls Onah. “We’d live with the students for a week, in a very contained environment. I recorded a lot of the voice lessons and the chants the students sang in assemblies.”

The natural world, one of noaccordion’s guiding inspirations, wound up on Onah’s recording device as well, especially as the group moved to pick coffee and tea in the botanical sanctuary of Gurukula. She recorded the wonderful cacophony of the Kerala forest, home to orchids and air ferns–and lots of buzz, hum, and song. “Rainforests are SO loud,” she laughs. “I got a lot of amazing birdsongs and, in one track, crickets. When I got back, I realized they had a perfect BPM! I created all these samples, and used them a bit, but then I shelved them for years.”

When Onah went back through the samples, she hear something unexpected: Trap. “What’s happening with trap has happened with a lot of club music styles, like dubstep,” she explains. “It was a very specific sound at first, very grimy and edgy, without a lot of vocals. Now it’s an underlying approach that’s being embraced by more of the electronic music scene. A lot of us musicians producing electronic stuff love some of the sounds trap have to offer, but don’t hear all the intense elements on every track.”

Onah did like the style’s lower BPM, with its double and triple-time potentials, its crescendos. She stripped the style down to what she connected to most, added lush choral samples, and salted the tracks with live percussion, tambura and electric sitar, thanks to Benny Langfur. (“Response”)

She also heard how, in her sleeker, gentler version, trap overlapped with another favorite sound: Jamaican dub. It was the perfect approach for adding accordion. “I have a lot of dub influence, especially producers like Augustus Pablo,” she notes. “Melodica and accordion are similar and have a similar sound. I’m doing those offbeat skanks that you might hear on one of Pablo’s dub tracks.” (“Mellow”)

The effect renders trap in a beautifully minimal, organic way, something akin to what Cologne’s producers did to the roar of techno, especially on tracks like “Tampani.” “I’ve worked with all sorts of sounds and ideas, but I never expected to create something this soothing. There’s something undeniably uplifting about the sound of children singing and chanting together. It was lovely to record such a large group of people singing. It ended up being one of the calmest albums I’ve created,” with the perfect grounding of dynamic beats.

The Album “Gurukula” releases this October 19 with a Celebration Party happening at The Kava Lounge SF.