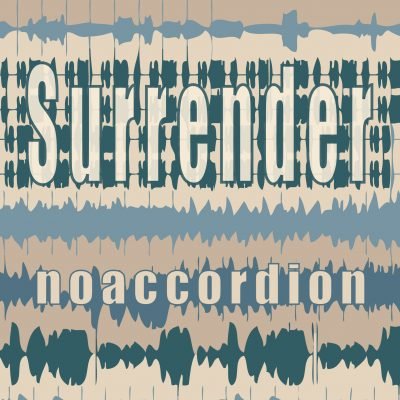 When noaccordion’s Onah Indigo threw herself into writing music for her new LP she was hurting, physically and emotionally. She titled one track “Nemesis,” then “Enemies.” As the balm of creating music and collaborating with friends healed her hurt, she gave the track a final title to signify her new state of mind: “Allies.”

The Oakland-based electronic musician and accordion maverick was reeling from a soured relationship and the lingering pain of a back injury when she created the music on Surrender (self-release May 2019). “The best way for me to work with pain was to make the music,” she explains. “It was a dark, heavy winter, and I just had to plug myself into the studio and focus on songwriting. I’m driven to process my emotion, and music-making transforms it into beauty.”

Surrender is the result of this alchemical process: transmuting the emotional energy of that leaden winter into glitch hop-infused electronic tracks. At the heart of each track, eclectic beats are juxtaposed with the unexpected samples that are typical of noaccordion albums- if anything about noaccordion can be called typical.

For one thing, there is accordion on Surrender. Despite her initial ambivalence about the unwieldy instrument that gives her act its name, Onah has embraced the accordion in the studio and on stage. On the downtempo meditation “Another Way,” she spins a thread of melody with the accordion akin to how some other electronic artists use violin, while on “Mars,” it takes on an aggressive, distorted edge that Onah describes as angry “Aries energy” in response to the current political climate.

“Grow” encapsulates the mood of the album. Onah builds a lush undergrowth out of layers of piano, heart-thumping beats, and operatic vocals. After she created the achingly beautiful backing track, Onah invited Aleksandra Dubov to lend some extra sweetness with her classically trained voice. The sonic landscape has a range reminiscent of Phaeleh’s cinematic electronica, but it’s charged with feminine energy that testifies to Onah and Aleksandra’s close collaboration on the vocals and lyrics. “After rocky relationships, where is it safe enough to let my garden grow?” Onah asks. “We both related to that.”

Onah’s alchemical quest for transformation takes her through a spectrum of personas and moods. On “Ready,” Surrender’s first track, Onah twines her voice with other singers to celebrate femininity and many forms of love. Onah sampled her own voice and pitched it down to play with a male persona on “Lessons,” the glitch hop track that closes out the album.

This sonic and emotional range is extended further by the artists that allied with Onah on Surrender, many of whom are also part of the East Bay’s wildly creative, deeply weird, highly collaborative experimental music and art scene. Trumpeter Eric “eO” Oberthaler ties together the cumbia-flavored beat medley of “Quick Time,” the sweet-sounding flow of Michaelah Miraculah overlays the heavy beats of “The Cure,” and a Reggae chorus by Spencer Garret Burton of the Indubious duo funks up “Goodness Rise Again.” Under Onah’s guidance, all these elemental energies feel at home in Surrender’s amalgam of sounds.

“That word surrender is a big deal for me,” Onah muses. “I want to surrender into the feminine, but most of the time I don’t feel safe. I’m trying to look at surrender from a more powerful point of view. Surrender isn’t giving up, it’s learning about when to yield, being more mindful, and accepting the moment with grace. Surrendering can be empowering.”